The Heroic Flaw- The Cornerstone of Story Conflict

Even as a kid, I knew Heroes had flaws. I didn't understand why, but I could see them.

Superman- I thought was kind of lame. I didn't believe in his super powers, which I thought were ridiculous, but Kryptonite that could disable him? That was stupid. And what was really obvious was, that wasn't his flaw. His flaw was that he was too afraid to admit he loved Lois Lane. Superman afraid? He was too afraid someone would discover his secret identity. Why? Did he think Clark Kent would lose his job? Come on, the man could have married Lois and they could have had twenty kids. He could protect whole cities, couldn't he? But he couldn't protect his family? He could speed around the planet so fast, he could make the days go backward, and he couldn't protect his loved ones? What a cop out!

Now, the Lone Ranger was different. And besides, he rode Silver. But what the heck was he protecting with his mask? His silver mine? Maybe he thought he'd get arrested for impersonating a Texas Ranger. But at least I 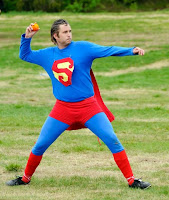 could see some mystique to him, and imagine those distant cabins in the hills where he rode off into the sunset to be until he was needed again.

He wasn't afraid of women- not like the guy in blue tights.

Or was he? Maybe he was more like my brothers and just didn't have time for them.

That was a flaw, too. But I think I was starting to get it. A man like TLR was just waiting for the right woman to come along- he just didn't know it yet.

The failure in Superman's flaw, and that of so many other Super Heroes, was that it was external. Kryptonite. It didn't touch the emotions. There was fear, of course, and was really unmanly in my estimation back then. I'm okay with a guy fearing for those he loves, but not when it enervates him. Superman was just using that as an

excuse for his real fear- WOMEN. That's, to me, just a guy with muscles. Not a Hero.

I didn't know back then that I was developing my concept of the Romantic Hero, who doesn't need the stupid jumping-tall-buildings stuff to be heroic. But he does need flaws. And he does need to find within himself whatever it takes to overcome them. And he needs a heroine to help him find his strength. Conversely, he needs to do the same for her.

The conflict that makes a romance a riveting read begins with the flaws, continues with the struggle to protect them and the fight against them and culminates with victory over them.

The flaws have to be strong enough and dangerous enough to threaten the outcome of the story. But at the same time, an unheroic flaw can kill a story faster than anything. Back to our Superman/Lone Ranger analogy: He can love his freedom and independence so much, he doesn't want to give up any part of it, but he can't be afraid of women. That's not worth my time. F

or one thing, a guy like that will never change, and he'll be constantly on the offensive against her, to protect himself. Sort of like the sand box kid who yelled, "Mommie! She hit me back first!"

But I do love a Wounded Hero- because we all are wounded in some way.

Here, I'm using three of the four clips of my skyscraper ad for APHRODITE'S BREW to demonstrate my point. I'm working right now to condense these three into one message for the reverse side of my bookmark, and you'll see why in a minute, as it also demonstrates my premise of flaw as cornerstone to story conflict.

Val in APHRODITE'S BREW is one of those. He has a strong surface. He's re-built his scar into something he knows how to live with. But he doesn't know how to get to the next step, and his experience has taught him he doesn't want to go that far. Here's a man who suffered a serious wound in the form of the wife who never loved him and then betrayed him, leaving him with a legacy and a moral dilemma in the form of a child who wasn't his. Like a lot of men in his time, he had plenty of social skills, but was missing the one about how to love. And like my imaginary vision of the Lone Ranger, he secretly hungered for the woman who knew how to teach him what he was missing.

In this story, both hero and heroine had essentially the same flaw and conflict, but for different reasons. That's unusual, but it worked for me this time. Sylvia und

erstood and had worked through the second step in her grieving process, but had stopped there. I've thought it interesting in reading reviews on this book, that some reviewers didn't recognize that both of them were essentially dealing with significant loss although others did. Often, people who have never suffered losses that were vital to them have a simple solution- Get over it. But most of us know it's simply not that simple. Significant loss of loved ones changes our lives and we have to work through it. That's the real conflict in this story, not the love potion or fear of marriage or anything external.

Are you noticing it's sometimes hard to tell the flaws from the strengths? That's because they really are the same thing. They're like a coin with two sides. On the obverse, the strength is visible, and on the reverse it's the weakness you see. In this case, Val's basic strength is his inner kindness and moral structure. He dealt with the betrayal honorably because he could not do otherwise. But his strength, his honor and morality, made him vulnerable to betrayal and scarred his chance to learn how to love. Will he conquer his weak side by using his strong side? That's the real story question, not just for Val, but for all romance heroes.

Val is no coward. He doesn't just find a way to use his scars. No, he has to challenge them- test to see if he can put himself in the path of danger and repel it. I think there's something in him that knows he has a "weakness", a desire for something he can't identify, that threatens the new autonomy of permanent bachelorhood which he has decided is his solution. So he has to constantly be testing it, flaunting his strength over his weakness, to prove to himself he can't be caught in the marriage trap.

Enter Heroine, Sylvia. Enter Romantic Conflict, the battle to prove Val either right or wrong-- or perhaps both. So in these three clips, you see the story beginning: External clues lead to and showcase the internal conflict, and show you how this battle will be fought:

"An odd blue bottle... A funny-looking locket... A bewitching pair of silver-green eyes... Lead to a sneaky love potion that spells doom to the bachelors of the Ton. Especially the one who thinks he can't be caught."

What do I have there? The famed/cursed Elevator Pitch. The High Concept. The BLURB!

Why? Because it leads straight to the crux of the story, the conflict. And the conflict clearly points to its base, the Heroic Flaw.

Give it a try. You not only can find a strong base for your hero's inner conflict based on his character with its strength and converse weakness, but you quickly get the synthesis of your story into an intriguing short blurb.. Your promo is designed before you even begin!

Gee, I wish I'd known that before I started the story!
Posted by Delle Jacobs at 10:07 AM

This is a discussion blog. Spam of all kinds, including unrelated book promotion, is not welcome and will be diligently removed.