Under- $100 eBook Reader Is Here! and Other Exciting News

For years I've been hearing people say they wouldn't read ebooks until they could buy an ebook reader for under $100. That seemed to be a Magic price point for people everywhere. Kindle and Sony changed the price point for a lot of people by providing e-ink and better book accessibility, but still many readers wanted that cheap, no-frills reader, and couldn't understand why it couldn't be done.

Well, now there finally is one, available at Fictionwise/eBookwise sites, for $89.95. It's the eBookwise 1150. True, it's not a nice slick new model with e-ink screen. http://www.ebookwise.com/ebookwise/ebookwise1150.htm

Description:
The size of a paperback book, weighing about a pound, and with its backlit screen, the eBookwise-1150 gives new meaning to the term "light reading." The device also includes powerful electronic features that offer you a reading experience beyond that of a traditional book. You can turn pages and change the text orientation just by pushing a button. By simply touching the screen, you can enlarge the text size, bookmark pages, highlight passages, make notes, search for key words and hyperlink to other parts of the book. 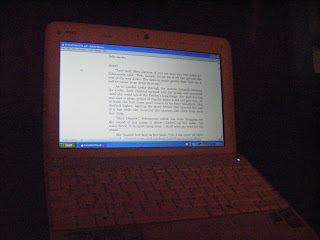 Kindle, meanwhile, is planning on giving away FREE the new software for reading Kindle-formatted books on your PC.

This might not be interesting to some people, but there is a surprisingly large number of people who have become accustomed to reading on their PC, laptops or mini-laptops (netbooks). Some of these folks, like me, were once the very people who said they couldn't read for hours on a computer screen. But that was before screens became so sharp and clear. It was also before we just plain got used to using computers for so many hours a day. Now that the Kindle software will become available any day now, this means Amazon is now a source for me to buy my ebooks. And I don't have to spend a few hundred bucks to buy a device that, for me, isn't 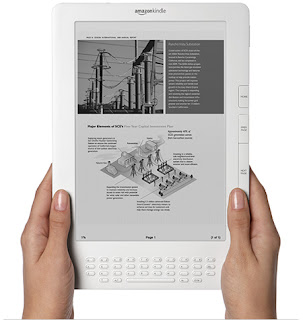 what it's cracked up to be. In fact, e-ink screens hurt my eyes and give me headaches.

My main complaint about the Kindle and other e-ink devices is that the screens are so small. Sure, I can enlarge the font, but then I'm spending time frustratingly scrolling side to side as well as up and down. Or I have to re-format into something decidedly un-book-like that sometimes splits words in strange places or duplicates lines or paragraphs when scrolling to the supposed next page.


The Kindle DX is larger, almost the size of a sheet of paper. More my size. But at $489? I'm afraid not. But it is a factor in driving down the prices of other less-endowed ebook readers. The Kindle 2 is now $259 at Amazon, and Christmas is coming. I'm betting there will be a price reduction suddenly announced just in time for holiday shop 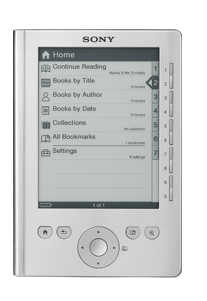 And Sony? Showing improvement- much sleeker, better models. And I've seen older models on sale at Fry's Electronics for $159-179. They're getting less proprietary, and adding more formats like PDF. You can access public libraries and Google Books Online. But not with the older model that's on sale. So you'd still be stuck with the Sony store, where books are more expensive.

The Foxit eSlick was also recently spotted at Fry's Electronics, (brick and mortar stores) as was the Jetbook. Prices for both were running around $179. It's probably no surprise to 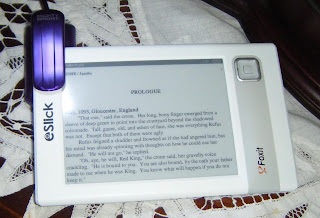 you that both companies are probably coming out with new models. Funny thing how lower prices show up just before new model releases, isn't it? But sometimes

that's the best way to buy technology. Foxit, by the way, does seem to have resolved its battery drain problem, which was its major drawback.
Jetbook's manufacturers, ECTACO, have just announced they will be releasing a new model, the Jetbook Lite, which will come out at $149! It's not an e-ink screen, and is more like the eBookwise, but seems to have a few more features.


What about the Nook? A different technology that shows lots of 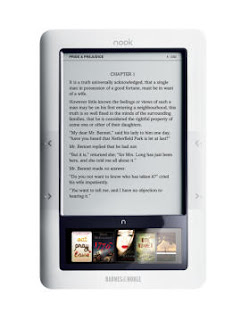 promise. Although the reading screen is grayscale, there's a touch screen for commands that's in color. Why? Maybe because most ebooks are still text only and don't need color? But I'm still waiting for the aility to read and see books full of pictures. Color pictures. At least Nook is showing the possibility. Price: $259. Oops, right back up there in the sky.

And a new wrinkle in Nook's sleeve: Barnes & Noble is now being sued by Spring Corp for stealing the secrets of their Alex under the guise of a cooperative partner venture. According to Spring, B&N actually participated in meetings 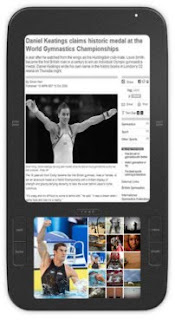 with them regarding developing a "Kindle Killer" reader, without telling Spring they actually had a device of their own under development.

The bottom line? If you want a cheap reader, it's available, now. If you have a netbook, you will very soon be able to get Kindle software and buy Kindle books without buying a Kindle.

You can still get great deals, often at better prices than Kindle, on Fictionwise and EBookwise. As for the fancy, expensive devices, well, spend your money if you want. They're good deals if this is what you want. But they'll all be better buys next year, both cheaper and better-featured. And Christmas is coming. The field is getting very competitive. Let's make that extremely competitive.
Posted by Delle Jacobs at 11:49 AM 14 comments: